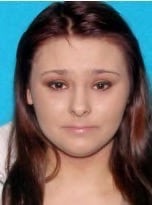 Goshen Police are looking for a woman the say may have information about a home invasion robbery that happened around 9 p.m. on Sunday, Dec. 13 in the 800 block of Bayberry Drive.

Anastasia M. Lebbin is described as 5’2” tall with brown hair and eyes. It is believed she may be in the South Bend area.

A mother, father and son were in the home on Bayberry Drive when as many as three suspected entered, flashed a gun and demanded money, according to Goshen Police.

Anyone with information about Lebbin’s whereabouts is asked to contact Detective Nick McCloughen with the Goshen police department at 574-537-3804.