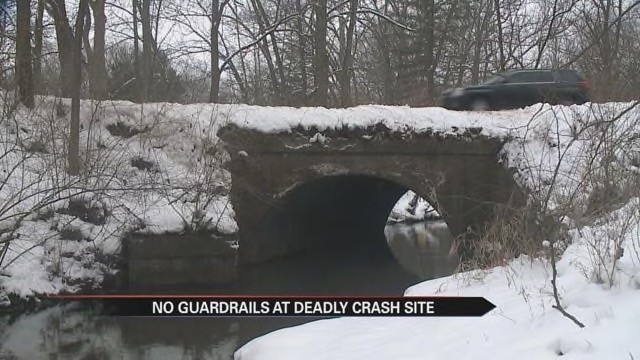 Some Niles residents are questioning why there isn’t a guardrail along a road that goes over Brandywine Creek after two parents were found dead in the creek over the weekend, as reported by our news partners ABC 57.

Autumn Mehl, a 29-year-old mom of three, and Steven Rough, a 26-year-old dad of one, died of drowning after the vehicle they were in crashed into the creek off of Bond Street sometime Saturday, Feb. 13. They were found Sunday morning, Feb. 14.

There is a drop of several feet on either side of Bond Street over Brandywine Creek, but there isn’t a guardrail.

Louis Csokasy, manager of Berrien County Road Commission, told ABC 57 that there are a lot of factors that go into deciding where to install a guardrail.

“What we tend to do is not look at any specific item, safety item, on the road,” Csokasy said. “We tend to look at the road from a holistic standpoint and then back that off into those individual areas, such as stop signs, warning signs, guardrails, those types of things.”

And while guardrails are usually installed during construction or reconstruction of a road, sometimes a vehicle crash can lead officials to install a guardrail in a specific location. That’s decided on a case-by-case basis.