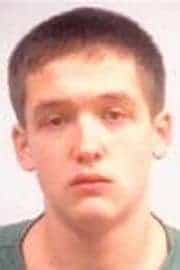 The second of the Elkhart Four to be released from prison will become a free man for the first time in almost three years on Thursday, March 31.

Blake Layman, 19, will be released from Wabash Valley Correctional Facility about two months after co-conspirator Levi Sparks was released from the same prison.

Layman, Sparks and co-conspirators Anthony Sharp and Jose Quiroz were each sentenced to at least 50 years in prison after they were convicted of felony murder in August 2013. The Indiana Supreme Court overturned the felony murder convictions for Layman, Sparks and Sharp in September 2015 and ordered that they be re-sentenced for burglary as a felony.

Quiroz, who pleaded guilty to felony murder, had his conviction modified and his sentence reduced after the Indiana Supreme Court ruling.

Their release dates were updated after they were re-sentenced and the Indiana Department of Correction gave them credit for time served, good behavior and completing prison programs, like the GED program.

One person injured in St. Joseph County after vehicle struck by train