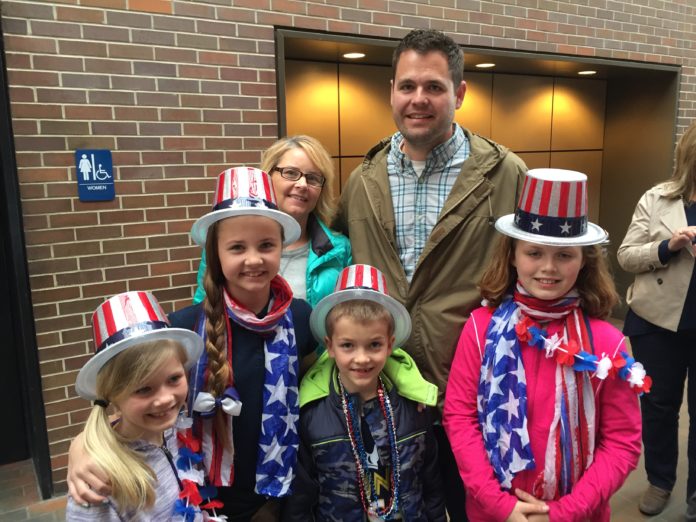 For the Riggenbach family, Ted Cruz’s rally in South Bend on Thursday night wasn’t just a chance to see their preferred presidential candidate in person — it was a civics lesson.

Jennifer and Scott Riggenbach and their children Madigan, Colton, Carson and Amity were decked out in red, white and blue while they waited in line at the Century Center.

“We think it’s a great government lesson for them,” Scott said. “Plus, a couple of them have been watching the debates and that type of thing. So we thought, what a great thing if we could get them to be in front of somebody that they’ve been seeing on TV and who could potentially be the next president.”

And though they aren’t old enough to vote, the children were very opinionated on why they believe in Cruz’s campaign.

“He will stick with the decisions that he makes rather than (other people running for president) right now, especially (Donald) Trump,” Carson said. “You can’t just make a decision and then change it afterwards.”

“One of the reasons I want Cruz to be president is he has those good Christian values which my whole family looks for,” she said. “I don’t want our religious freedoms to be taken away.”

Religious freedom was one of the many topics Cruz touched on during his 35-minute speech at the Century Center.

Cruz recalled a moment in a debate earlier this year when Trump was talking about nominating a justice to the Supreme Court to replace the late Justice Antonin Scalia.

Cruz reiterated his campaign promises to repeal Obamacare, abolish the IRS and replace the tax code with a flat tax, among other issues.

He spent a great deal of time praising Carly Fiorina, who he named as his potential running mate on Wednesday.

“You want someone who knows the golden rule,” he said. “And that’s not who has the gold makes the rules.”

Fiorina said that despite what Clinton and Trump say about being for the people, ”they won’t fight the system. They are the system.“

Cruz took that a step further.

”Donald and Hillary are both Washington insiders who have gotten rich exploiting government power,“ he said. ”And they are playing a game and trying to fool the voters.“

“It says a lot about a man that can be a strong partner to a strong woman.” – @CarlyFiorina of @tedcruz pic.twitter.com/Y7bGEgTpOd

Fiorina says she started as secretary during recession, rose to a CEO. “The only reason that is possible is because of our constitution.”

“I’ve challenged the system a few times in my life. That’s how you go from secretary to CEO.” – @CarlyFiorina

“We must take our country back.” pic.twitter.com/bAU8geGGqT

“If you want to unleash the economy you simply take the boot off the backs of the necks of small businesses.” – @tedcruz

“That’s what this election is about. Morning in America again.” pic.twitter.com/1VByfdFJB5

“I am so grateful that the entire country is now looking to Indiana.” @tedcruz pic.twitter.com/gTznAH4cXn

Speech is over. He’s shaking hands, taking selfies, signing items while “Only In America” plays pic.twitter.com/7E3HI4Yj21