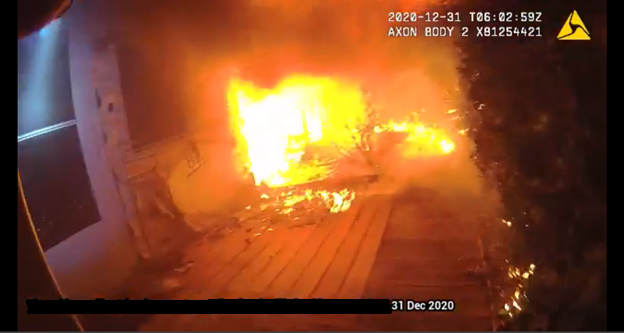 A Berrien County Sheriff’s Deputy is credited with pulling a woman to safety after her hone caught fire.

In the early morning hours of Thursday, Dec. 31, the 72-year-old homeowner called to report a structure fire at her home in the 1400 block of W. Water Street in New Buffalo. The homeowner was trapped in the home and was unable to remove herself from the fire.

Deputy Michael Pellerito of the Berrien County Sheriff’s Department’s New Buffalo Township Patrol arrived as flames engulfed the back corner of the residence. Pellerito initially forced entry into the front of the residence, but was forced back by heavy smoke.

With help from Berrien County 911 dispatchers, Pellerito was guided to the trapped homeowner’s location. Pellerito pulled the homeowner from a bedroom window to safety as smoke and flames intensified.

The resident was treated and transported by paramedics for minor smoke inhalation. There were no other injuries reported.