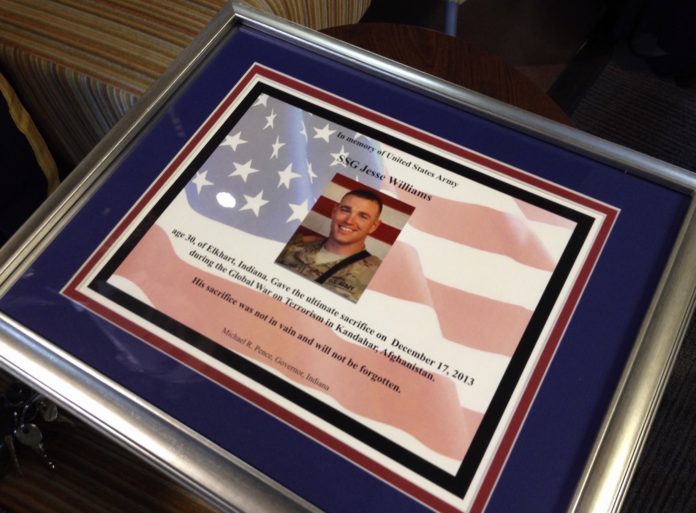 U.S. Rep. Jackie Walorski, R-Ind., introduced legislation this week to honor a fallen Elkhart solider by renaming the local post office after him.

Walorski introduced H.R. 2413 on Tuesday, May 19. The bill would rename the Elkhart post office at 601 S. Main St. the “Staff Sergeant Jesse Williams Post Office Building,” according to a news release from Walorski’s office.

Williams was one of six soldiers killed Dec. 17, 2013, in a helicopter crash in Afghanistan. Williams attended Elkhart Central High School and in 2006, completed the U.S. Army basic training course.

A little more than a year ago, Walorski presented the Purple Heart to Williams’ family in his memory.

“While no action by this body will ever repay Jesse’s sacrifice to our country, renaming this post office will leave a lasting memory of his courage and bravery,” Walorski said in the release. “On behalf of Hoosiers across Indiana’s Second Congressional District, we are proud to call him one of our own and thank God for giving us this hero.”

Every member of the Indiana House delegation has signed as a co-sponsor of the bill, which has been sent to the Oversight and Government Reform Committee, according to the release.