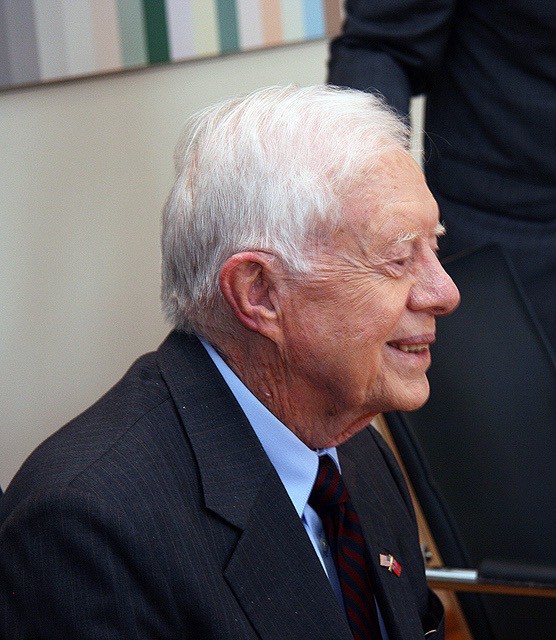 ATLANTA (AP) — The latest on former President Jimmy Carter, who said Wednesday that he has cancer (all times local):

The White House says President Barack Obama has spoken with former President Jimmy Carter and wished him a full and speedy recovery from cancer.

Carter announced Wednesday that he has cancer and will undergo treatment at an Atlanta hospital.

He says the cancer was discovered during surgery this month to remove a small mass in his liver.

Carter, the nation’s 39th president, says the cancer has spread to other parts of his body.

Obama telephoned Carter during his vacation in coastal Massachusetts.

Politicians are sending former President Jimmy Carter their best wishes after the 90-year-old humanitarian announced Wednesday evening that he has cancer.

Georgia Gov. Nathan Deal tweets, “Sandra and I regret to hear that President Carter is facing a serious illness. We’ll keep him in our prayers as he undergoes treatment.”

Democratic Party of Georgia Chair DuBose Porter says on Twitter: “Thoughts and prayers are going up for President Carter and his family across the nation. … President Carter is tougher than a lighter knot, and we have faith that he will come through this.”

DNC Chair Rep. Debbie Wasserman Schultz, in a statement, says “My thoughts and well wishes are with President Carter, Mrs. Carter and their family. I wish him strength as he faces this challenge head on, as I am sure he will do with the same spirit with which he has always fought on behalf of others.”

Dr. Lodovico Balducci, a specialist on treating cancer in the elderly at the Moffitt Cancer Center in Tampa, says age by itself does not preclude successful cancer treatment. He says much depends on the patient’s “biological” age versus his actual years.

Balducci says, “A man 90-years-old normally would have a life expectancy of two or three years, but Jimmy Carter is probably much younger than that” in terms of his function. “If he tolerated liver surgery I imagine he has a relatively good tolerance” to other treatments that might be tried.

Balducci says the first task is to determine if the cancer is curable, “which is unlikely with metastatic cancer,” or if it is possible to meaningfully prolong the life through further surgery or other treatments.

Former President Jimmy Carter announced Wednesday afternoon he has cancer and will undergo treatment at an Atlanta hospital.

In a statement issued Wednesday, Obama addresses Carter directly, saying: “Jimmy, you’re as resilient as they come, and along with the rest of America, we are rooting for you.”

The 90-year-old carter announced Wednesday that he has cancer and will undergo treatment at an Atlanta hospital.

Carter had surgery earlier this month to remove a small mass in his liver.

He says in Wednesday’s statement that the surgery revealed the cancer and that it spread to other parts of his body.

Carter was the nation’s 39th president.

Obama says his and the first lady’s thoughts and prayers are with Carter’s entire family.

Shortly after former President Jimmy Carter announced he had cancer Wednesday well-wishers took to Twitter to show their support for the 90-year-old humanitarian.

Georgia Sen. David Perdue tweets, “Bonnie and I extend our heartfelt prayers to President Jimmy Carter and the Carter family.”

Bernice King, daughter of Martin Luther King Jr. posts “President #JimmyCarter is in my thoughts & prayers. May the Lord heal, comfort & encourage this extraordinary servant-leader to the world.” And from The King Center: “We are praying for you, President #JimmyCarter. You are a champion for the global community. Thank you.”

The Atlanta Braves tweet, “We’re all wishing you the best with your upcoming treatment, Mr. President.”

Carters’ grandson, former Georgia state Sen. Jason Carter tweets, “Thanks to everyone for your thoughts and prayers for my grandfather and grandmother. I will pass them along!”

Lichtenfeld says, “There’s a lot we don’t know,” but the first task likely will be determining where the cancer originated, as that can help determine what treatment he may be eligible for. Sometimes the primary site can’t be determined, so genetic analysis of the tumor might be done to see what mutations are driving it and what drugs might target those mutations.

He adds, “Given the president’s age, any treatments, their potential and their impacts, will undoubtedly be discussed carefully with him and his family.”

Former President Jimmy Carter announced Wednesday afternoon he has cancer and will undergo treatment at an Atlanta hospital.

Carter was the nation’s 39th president.

Former U.S. President Jimmy Carter says he has cancer and will undergo treatment at an Atlanta hospital.

Carter announced the diagnosis in a statement from the Carter Center on Wednesday afternoon.

Carter, 90, had surgery earlier this month to remove a small mass in his liver. He says in Wednesday’s statement that the surgery revealed the cancer.

Carter says he will rearrange his schedule to be treated at Emory Healthcare. He says a more complete public statement will be issued next week when more details are known.

Carter was the nation’s 39th president. After leaving the White House, he founded the center in Atlanta in 1982 to promote health care, democracy and other issues globally.

Copyright 2015 The Associated Press. All rights reserved. This material may not be published, broadcast, rewritten or redistributed.