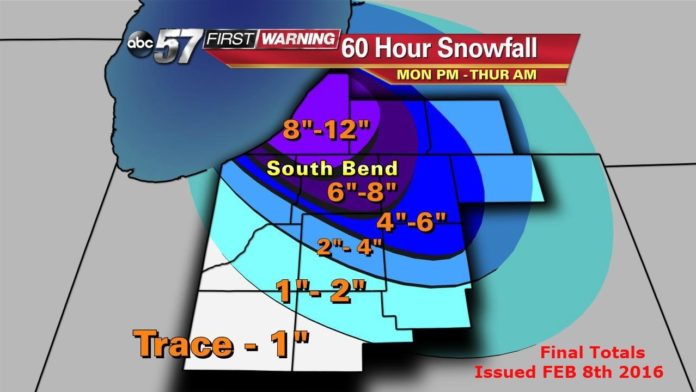 The National Weather Service in Northern Indiana has issued a winter weather advisory in effect until 10 a.m. on Thursday, Feb. 11.

The winter weather advisory is in effect for St. Joseph, Elkhart and LaPorte Counties in Indiana, as well as Berrien, Cass and St. Joseph Counties in Michigan.

Lake effect snow showers will become more developed by late Tuesday afternoon and persist into Thursday morning, according to the National Weather Service.

The heaviest snowfall rates will take place late Tuesday night into Wednesday afternoon. Snowfall rates of up to 2 inches per hour are possible within the strongest snowbands with sudden reduction in visibility to near zero at times. Blowing and minor drifting of snow is also expected. Roads will become snow covered and remain slick and hazardous.

Wind chill temperatures will range from 5 below to 5 above zero Tuesday night through Thursday morning.