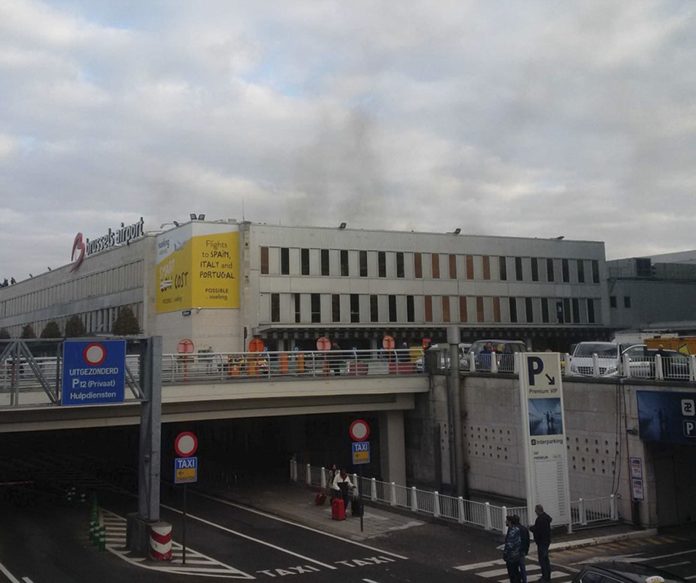 BRUSSELS (AP) — The Latest on the suicide bombings this week in Brussels (all times local):

A U.S. official says at least two American citizens have been confirmed killed in this week’s attacks in Brussels.

The announcement comes as Secretary of State John Kerry is visiting the city to express his condolences to the Belgian people.

Speaking after meeting with Belgian Prime Minister Charles Michel, Kerry said the “United States is praying and grieving with you for the loved ones of those cruelly taken from us, including Americans, and for the many who were injured in these despicable attacks.”

He did not give a specific number but a senior official said the families of two Americans had been informed of their deaths in Tuesday’s attacks. The official, who was not authorized to speak to the matter publicly and spoke on condition of anonymity, did not have further details.

Belgium’s nuclear agency has withdrawn the entry badges of some staff and has denied access to other people amid concern the country’s nuclear plants could be a target for extremists.

But she said the move “is not necessarily linked with the terrorist attacks.”

Immediately after Tuesday’s attacks on the Brussels airport and subway, security was boosted around Belgium’s nuclear sites and hundreds of staff were sent home.

Scheerlinck said the decision to withdraw badges or deny access usually takes weeks and is based on information from the intelligence services and police, as well as a person’s criminal record.

She declined to say how many were refused entry, but denied Belgian media reports that 11 staff had badges withdrawn at the Tihange plant since early last week.

French officials say a man arrested by intelligence agents in a Paris suburb has connections to the suspected ringleader of the Paris attacks.

Two French officials, who spoke on condition of anonymity to be able to discuss an ongoing investigation, said the man detained Thursday is Reda Kriket, a 34-year-old Frenchman wanted since January on suspicion of links to terrorism. France’s interior minister said the man was in the “advanced stages” of a plot to attack a target in France.

A Belgian official, who spoke on condition of anonymity for the same reason, said Kriket was convicted in absentia in July along with Abdelhamid Abaaoud and others for being part of a recruiting network for jihad in Syria.

Authorities have identified Abaaoud as the ringleader of the Nov. 13 attacks in Paris. He died in a police raid a few days later.

France’s interior minister said there was no evidence “at this stage” to link Kriket to last year’s Paris attacks or this week’s attacks in Brussels. But a French police official said explosives and multiple weapons, including at least one assault rifle, were found in an hours-long search of a home in Argenteuil.

— By Associated Press Writers Lori Hinnant in Paris and John-Thor Dahlburg in Brussels.

U.S. Secretary of State John Kerry has arrived in Brussels for counter-terrorism talks with EU and Belgian officials and to pay his respects to the victims of this week’s attacks.

Kerry landed at the still-closed Brussels airport for a brief, hastily scheduled stop from Moscow, where he said the attacks underscored the urgency of unity in the fight against the Islamic State group. The group has claimed responsibility for Tuesday’s bombings at the airport departure terminal and a downtown subway station that in total killed 31 people and wounded 270.

On his five-hour visit Kerry is set to meet with European Union Commission President Jean-Claude Juncker, Belgian Prime Minister Charles Michel and Foreign Minister Didier Reynders as well as King Philippe. He will also lay a wreath at a memorial site at the airport for attack victims.

The Netherlands’ foreign minister says three Dutch citizens were killed in the bombing at Brussels airport.

Foreign Minister Bert Koenders said in a statement Friday that the victims were a woman from the eastern city of Deventer and a brother and sister from the southern Limburg province who live in the United States. He did not release their identities.

Koenders, who is on a visit to Indonesia, says “it is terrible that these people have been killed by the arbitrariness of terror.”