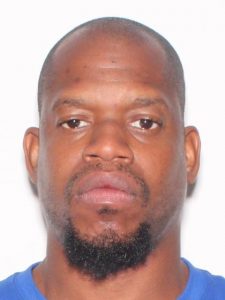 Fred Robertson Morris (pictured) and Revlon Harrell are charged in connection with a shooting that occurred on Dec. 29, on Lincoln Way West in South Bend, and resulted in the death of Anthony C. Logan.

Fred Robertson Morris, 33, of South Bend, is charged with Murder with a Felony Firearm Sentencing Enhancement. A warrant was issued for Morris, but he has not yet been located. Anybody with information regarding Morris’ whereabouts is asked to not approach and to call either local law enforcement, CMHU at 235-5009, or Crime Stoppers at 288-STOP.

Revlon Harrell, 27, of South Bend, is charged with Assisting a Criminal. Harrell was ordered held until her initial bail hearing, which is scheduled for Monday, Jan. 4.

Harrell was previously arrested on Dec. 29 and was booked into the St. Joseph County Jail where she remains in custody.

On the evening of Dec. 29, South Bend Police were dispatched to the 2000 block of Lincoln Way West in South Bend due to a Shot Spotter notification.

Upon arrival officers observed a tan vehicle that had crashed into a yard. The driver, later identified as Anthony C. Logan, was the sole occupant and was found unresponsive with apparent gunshot wounds. Mr. Logan was later pronounced dead at Memorial Hospital.

Very early in the investigation, Harrell spoke with detectives and claimed that she had been the one who fired the gun at Logan. Harrell stated that she had shot Logan because he was stealing her unoccupied vehicle.

Originally, Harrell claimed to have shot and killed Logan and gave specific details, including the location of the gun used. Originally, Harrell adamantly denied that her boyfriend (Morris) was home at the time of the shooting. Harrell was arrested based on her original account of the events and the corroborating evidence.

Detectives continued the investigation and obtained surveillance footage of the shooting and surrounding circumstances.

The video clearly depicted Morris as the person who shot Logan. While the events captured in the recording had some consistencies with Harrell’s initial statement, the version of events differed in a number of ways, including: the proximity of the shooter to vehicle; the number of shots fired; and that Morris was in fact present and was the shooter.

Indiana Code 35-41-3-2 states that deadly force is justified to “prevent serious bodily injury to the person or a third person”.

Additionally, a person is justified in using deadly force if the person “reasonably believes that the force is necessary to prevent or terminate the other person’s unlawful entry of or attack on the person’s ….occupied motor vehicle” (emphasis added). IC 35-41-3-2 specifically prohibits use of deadly force to protect property alone.