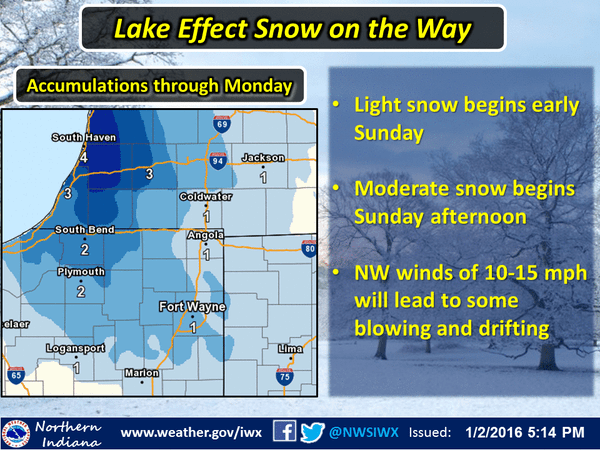 A Lake effect Snow Advisory is in effect from 1 p.m. on Sunday, Jan. 3 to 1 p.m. Monday for St. Joseph County, Elkhart County, LaPorte County and Berrien and Cass Counties in Michigan.

Lake effect snow will increase as the day progresses with the heaviest bands moving in later Sunday night, according to ABC 57 Meteorologist Jackie Layer.

Expect reduced visibility with blowing and drifting snow as winds pick up out of the NW between 10-15mph. These snow showers will continue into the early morning hours of Monday, making the morning commute slick and snow covered especially in our NW most counties. The coldest temperatures of the season move in late Monday night before we see a warm-up by midweek.

Sunday: Lake effect starts off light in the morning, moderate by the afternoon with the heaviest bands setting up by this evening. Highs reach into the lower 30s. Up to 4″ possible in our NW counties, otherwise 1″-3″ of snow is possible north of US-30.

Monday: Lake effect snow continues in the morning hours then clearing, highs in the mid to upper 20s.