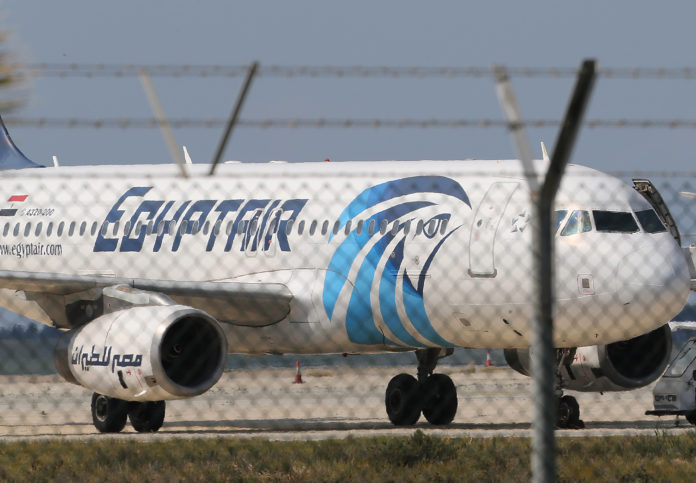 CAIRO (AP) — The latest news on EgyptAir Flight 804 from Paris to Cairo, carrying 66 people, which disappeared early Thursday. (All times are Egyptian.)

Greek civil aviation authorities say all appeared fine with the flight until the time when air traffic controllers were to hand it over to their Egyptian counterparts. The pilot did not respond to their calls, and the aircraft then vanished from radars. Kammenos’ comments are the first indication of what might have happened after the aircraft entered Cairo’s air traffic control space.

Passengers are preparing to board an EgyptAir flight from Paris to Cairo, hours after an earlier EgyptAir flight on the same route disappeared over the Mediterranean Sea.

Salama Kordeya, a 66-year-old business traveler, shrugged off journalists asking him whether he was comfortable stepping on to the flight.

He tells journalists: “Thousands of car accidents … and we use cars. I’m not afraid.”

Authorities have set up a special crisis center at Paris’ Charles de Gaulle airport for families of passengers of the missing plane.

Air traffic controllers tried to contact the pilot again at 03:27 local time for the handover of the plane to Cairo’s area of responsibility, but “despite repeated calls, the aircraft did not respond.”

Air traffic control then called on the emergency frequency and again there was no response. At 03:29, the aircraft was over the exit point of the Athens FIR, and at 03:29.40 it vanished from radar. The Greek authority said the military was asked for help in case the plane could be located on a military radar, but there was no sign of it. Search and rescue operations began at 03:45.

French President Francois Hollande has confirmed the crash of the EgyptAir flight, and says no hypothesis is ruled out or preferred, including an accident or a terrorist act.

Hollande says: “When we have the truth we need to draw all the conclusions.”

Speaking at the Elysee Palace in Paris, Hollande adds: “At this stage, we must give priority to solidarity toward the families” of the victims.

The Paris prosecutor’s office has opened an investigation into the disappearance of the EgyptAir flight.

The prosecutor said in a statement Thursdya that its collective accident department opened the investigation with the national gendarme service.

It said “no hypothesis is favored or ruled out at this stage.”

French Foreign Minister Jean-Marc Ayrault says “nothing is confirmed” regarding the disappearance of the EgyptAir flight and is warning against some unverified information in circulation.

Ayrault, speaking after meeting with families gathered at a hotel at Charles de Gaulle airport, tells journalists the priority is “solidarity” with them and extended a “message of compassion and support.”

He says French authorities are in direct contact with Greek and Egyptian authorities.

The French military says a Falcon surveillance jet monitoring the Mediterranean for migrants has been diverted to help search for an EgyptAir flight that crashed in the area.

Military spokesman Col. Gilles Jaron told The Associated Press that the jet is joining the Egypt-led search effort, and the French navy may send another plane and a ship to the zone.

He said the Falcon was on a surveillance mission as part of EU efforts to monitor migrants crossing the Mediterranean toward Europe.

The French government has offered military help to find the plane, en route from Paris to Cairo when it disappeared.

Airbus says the missing Egyptian plane flight was delivered to EgyptAir in 2003 and had logged 48,000 flight hours.

The European plane-maker said in a statement Thursday that the plane had engines made by Swiss-based engine consortium IAE, and had the serial number 2088.

Airbus said it is ready to help authorities investigating the disappearance and said “our concerns go out to all those affected.”

The director of Greece’s Civil Aviation Authority says air traffic controllers were in contact with the pilot of the EgyptAir flight as it passed through Greek airspace.

The director, Konstantinos Lintzerakos, said the plane was at 37,000 feet, traveling at 519 mph, and did not report any problem.

Lyzerakos told private Antenna television that controllers tried to make contact with the pilot 10 miles before the flight exited the Greek Flight Information Range (FIR), but the pilot did not respond. Lyzerakos says controllers continued trying to contact the pilot until 3:39 a.m. Greek time (1239 GMT) when the plane disappeared from the radar.

Lyzerakos says the plane was in Cairo’s FIR when it vanished.

France’s transport chief says there were three Egyptian security officers on the EgyptAir flight that disappeared after leaving Paris for Cairo.

Alain Vidalies told reporters Thursday after an emergency government meeting that the plane had seven crew members and three Egyptian security officers, “which is the usual practice.”

He said the plane was not carrying freight.

Egypt’s state news agency quotes Prime Minister Sherif Ismail as saying he can’t “rule out” any possibility when asked whether a terrorist attack is behind the missing plane. He said there was no “distress call” but there was a “signal” received from the plane.

The spokesman of the Egyptian army, Brig. Gen. Mohammed Samir, says in a statement posted on the army’s official Facebook page that the army has not received any distress call from the missing plane.

France is offering to send military planes and boats to help search for an EgyptAir flight that disappeared en route from Paris to Cairo.

He said: “We are at the disposition of the Egyptian authorities with our military capacities, with our planes, our boats to help in the search for this plane.”

He spoke after French President Francois Hollande held an emergency meeting at the Elysee Palace.

Ayrault confirmed 15 French people were on the flight. “We imagine the anguish of the families.”

Relatives of passengers on a vanished EgyptAir flight have started arriving at Charles de Gaulle Airport outside Paris, where their loved ones boarded the aircraft.

A man and a woman, identified by airport staff as relatives of the flight’s passengers, sat at an information desk near the EgyptAir counter Thursday at the airport’s Terminal 1. The woman was sobbing, holding her face in a handkerchief.

The two were led away by police and airport staff and did not speak to journalists.

The French government is setting up a crisis center for relatives at the airport.

Egyptian aviation officials say an EgyptAir flight from Paris to Cairo with 66 passengers and crew on board has crashed.

The officials say the search is now underway for the debris. They say the “possibility that the plane crashed has been confirmed,” as the plane hasn’t landed in any of the nearby airports.

The officials spoke on condition of anonymity because they were not authorized to speak to the press.

The French government says President Francois Hollande spoke with Egyptian president Abdel-Fattah el-Sissi by telephone, and they agreed to “closely cooperate to establish the circumstances” in which the EgyptAir flight disappeared.

The government statement cited Hollande as saying he shares the anxiety of families, in a written statement.

Reporters gathered in front of the small, empty EgyptAir counter at Terminal 1 of Charles de Gaulle Airport. Airport staff said EgyptAir staff were on their way.

Neither France’s Foreign Ministry nor Interior Ministry would comment on the disappearance of the jet or on whether it could have been an attack.

EgyptAir said the Airbus A320 was carrying 66 people on a flight from Paris to Cairo when disappeared from the radar at 2:45 a.m. Egypt time.

France remains under a state of emergency after Islamic extremist attacks killed 130 people in November. The Islamic State group continues to threaten the country.

Ahram, Egypt’s state-run newspaper, quoted an airport official as saying that the pilot had not sent a distress signal before the plane disappeared early Thursday. The last contact with the plane was 10 minutes before it vanished, he was quoted as saying.

The maker of the EgyptAir plane that has gone missing on a flight from Paris to Cairo says it’s unclear what happened.

Airbus spokesman Jacques Rocca says Thursday the company is aware of the disappearance but “we have no official information at this stage of the certitude of an accident.”

The A320 is one of the most widely used Airbus planes, a single-aisle plane that usually seats about 150 people and is used for short- and medium-range flights around the world. Nearly 4,000 are in operation, according the company’s website.

Greece is participating in the search and rescue operation for the missing EgyptAir flight with two aircraft. Helicopters are on standby on the southern island of Karpathos for potential rescue or recovery operations.

The Hellenic National Defense General Staff said one frigate is also heading to the area where the plane disappeared and is about 100 nautical miles or 4 hours away at this time.