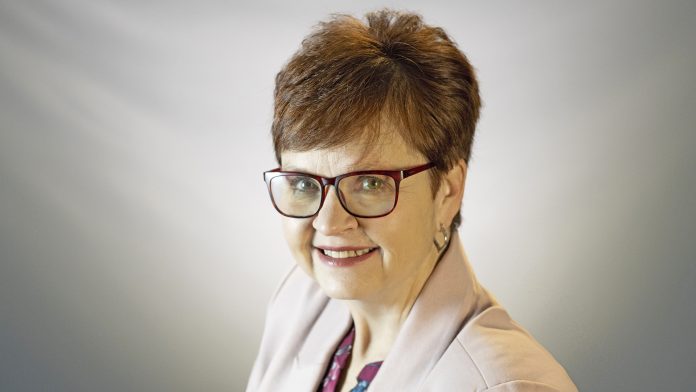 REAL Services is dedicated to helping elderly and low-income people become and stay independent for life. If you or someone you love needs help, call REAL Services at 574-233-8205.

As a high schooler growing up in small, rural, unincorporated Delton, Mich., Karla Fales mowed grass for older adult neighbors and cleaned their homes for them.

There, she lived in a trailer park with her family — including her grandpa — and there were lots of opportunities to help older adults in the community. Respecting and honoring elders was a natural part of her upbringing, and decades later, that passion for others has continued to serve her well in her professional career.

In March, Fales took over as president and chief executive officer of REAL Services, a nonprofit organization that provides programs and services that promote nutrition, self-sufficiency, education, and protection for adults and seniors living in 12 counties across northern Indiana.

As Fales has been settling into her role, she is working with the board and staff closely. She’s learning from them as she focuses on strategic planning, building team and employee culture, and setting future direction.

Before entering into this role, Fales spent 13 years as CEO for CareWell Services Southwest, an area agency on aging that serves eight counties in Michigan. Her experience also includes being a manager at Senior Millage manager; the director of planning and project development at CareWell Services; and the director of grants at Community Action Agency of South-Central Michigan.

TAKING OVER AS CEO

When the president and CEO position at REAL Services became available, Fales wasn’t necessarily looking to make a change. Once she did research about REAL Services, met with the board, and toured the facility, she knew she wanted the position.

Learning about the various moving parts — from the programming to the work being done to support caregivers and everything in between — sealed the deal.

“Once I started doing my research, what appealed to me was the combination of the community action and the area agency on aging,” Fales says. “In my work of building partnerships, we’d always worked together with our community action, and I always thought we could do more. But, particularly now, the intersection between community action and area agencies, I think, is much nearer, much closer.”

“Karla shares the same passion for service as her predecessors,” says Ryan Brennan, the chair of REAL Services board of directors. “Which was an essential quality in our search for our next leader.”

The transition has been made easier by the fact that crossover was allowed between Fales and Zaseck, which Fales says was a smart decision by the board and Zaseck. The pair overlapped for 30 days and, even past that, Zaseck has been available to Fales, which she says has truly been a gift.

Fales was also given something else — a yellow stack of papers, stapled together, that sits on her desk. At the top of the first page, there’s a title: The Playbook. The pages, full of important information for her to know, were prepared by Zaseck, but Fales is the one who created the title.

“As people ask me questions, I will go — or now they’ve gotten to the point where they’ll ask me — ‘Is that in the playbook?’” Fales says.

The learning curve has been made easier by the board. Fales says she continues to be impressed with the level of commitment and engagement by the board.

“You don’t have that at every organization,” she says. “It’s not just that they show up to meetings. They’re engaged in fund development. They’re engaged in partnerships. Their depth of knowledge and experience and level of commitment is phenomenal.”

Plus, Fales says she’s felt a warm welcome from the community. That’s something she appreciates since she’s never lived more than 10 miles from her hometown until now.

As with any job, Fales knows there are challenges to face. One that’s top of mind? Staff recruitment and retention.

Fales says the challenge is developing a system that respects the diversity of one’s workforce. There are employees who have been at REAL Services for decades and are loyal to the agency, and there are employees who will be around until the next best opportunity — neither is right or wrong, she says.

All organizations have a real challenge to face, which became clear during the pandemic. Companies must face the idea that workplaces and systems aren’t always equitable, often so because of legacy issues, policies and procedures, or other issues.

“So, I think to really make a dent in terms of the staffing, you have to provide not only the money, not only the culture, but also provide a daily experience that is equitable and honors the differences and diversity of people,” Fales says.

Another significant challenge that’s on the horizon is the state shifting to Managed Long Term Care Services and Supports.

“That’s basically taking Medicare and Medicaid beneficiaries and, rather than having them have Medicaid and then they have their Medicare, and then they have their Part D, all of their care is wrapped into an assigned managed care entity,” Fales says. “So that managed care entity is responsible for everything from medical care, to home and community-based services to nursing facility care.”

That’s a significant risk to REAL Services as an organization and the programming they provide.

VISION FOR THE FUTURE

When reflecting on REAL Services’s work, Fales says she appreciates how the organization has made sure they have the resources to address the variations in funding with a goal of being self-sustaining to support its programs.

Fales’s goals for the future of REAL Services include getting Milton Village fully operational and serving the needs of the community. She also plans to continue to expand and grow REAL Services’ social enterprises. In other words — to keep finding ways to earn income so they can survive.

She also wants to continue to focus on new ways of connecting with the community and addressing isolation in older adults. When thinking about community action, Fales says she appreciates how REAL Services handles family development in a proactive, hands-on manner in order to address poverty. That work will continue.

“I’m very excited about where this organization is going and the people that I work with,” Fales says.

The 220 employees and the 30,000 people they serve motivate Fales to come into the office each day. More than that, what motivates Fales is: “The type of stuff that doesn’t make it in the annual reports.”

That could mean helping an unhoused person who was in the parking lot, which REAL Services staff did recently. That didn’t involve providing a program of REAL Services, simply genuine compassion from employees to make sure the individual was OK. Or, it could mean bumping into people who say their parents used REAL Services and had a great experience.

“It’s that stuff that makes you realize you need to do a good job, because there’s people depending on you,” Fales says. “The people that I work with and the people that we serve always keep me motivated to get it right.”